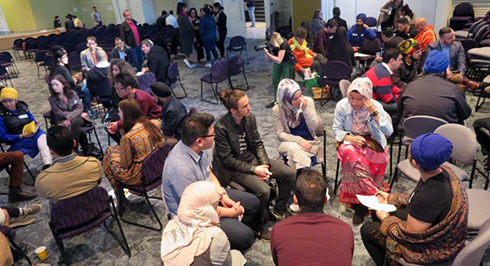 The teaching of the Catholic Church motivates and inspires Columban missionaries to reach out to Muslims in dialogue and friendship:

The numerical and global strategic importance of Muslims and Islam in the world make Christian-Muslim relations in our day particularly urgent. One in three people in the world is Christian; one in five is Muslim. Together, Christians and Muslims make up over 55% of the world’s population; on current demographic projections, this figure will increase to 75% before the turn of the century. If there is to be meaningful peace in the world, there must be mutual understanding and respect between Christians and Muslims.

"Inter-religious and inter-cultural dialogue between Christians and Muslims cannot be reduced to an optional extra. It is, in fact, a vital necessity, on which in large measure our future depends."
(Pope Benedict XVI, 20 August 2005)

Although numerically small in Australia (2.6% in the 2016 census), Muslims and Islam loom large in people’s consciousness.  This is largely due to negative stereotypes generated by sensationalist, misleading and unrepresentative media reports.  To counter this false witness against the vast majority of Muslims who are good, moral, upright, peace-loving citizens who are raising their families and serving the common good, Christian-Muslim relations are also very important in our multicultural, multi-faith Australian society.

Our society and our world are becoming increasingly multi-religious. Due to waves of migration over generations, refugees fleeing conflict and famine, and the relative ease of international travel, more and more, believers from different religions live and work side-by-side in suburbs, factories, schools and offices. Building mutual understanding between people of different faiths and promoting mutual respect and cooperation is crucial for ensuring peace and harmony in society.

"An attitude of openness in truth and in love must characterize the dialogue with the followers of non-Christian religions, in spite of various obstacles and difficulties, especially forms of fundamentalism on both sides. Interreligious dialogue is a necessary condition for peace in the world, and so it is a duty for Christians as well as other religious communities."
(Pope Francis, Evangelii Gaudium, 250)

In an age of instant global media, religious diversity is inescapable. If Muslims, Jews and believers from other religions are not living or working in your particular neighbourhood, they have entered your living room via TV, the internet and mobile devices. Columbans do not see this diversity as a threat to be feared. Rather, we see it as an opportunity to widen our horizons, to ask new questions and to gain new insights into "the height, breadth and depth of God’s" all-inclusive love. (cf Ephesians 3:18).

“A life unlike your own can be your teacher.” (St Columban)

"Enlarge the site of your tent, and let the curtains of your habitations be stretched out; do not hold back; lengthen your cords and strengthen your stakes."  (Isaiah 54:2)

As followers of the crucified and risen Christ, we identify with all who suffer. Muslims today suffer from a bad reputation. Violent, criminal acts committed by a few extremists give all Muslims a bad name. Although these acts are contrary to clear Quranic precepts and established Islamic teaching, sensationalist media reporting multiplies the negative stereotype that generates fear, suspicion and prejudice. Columban missionaries choose to stand in solidarity with the vast majority of Muslims who are unjustly subjected to such unjust treatment. With Muslims and believers from all faiths, we condemn violence as being incompatible with genuine religion. Mindful of the Gospel injunction to "first take the plank out of your own eye" before attempting to remove the speck in others’ eyes (Matthew 7:5), we do not join in the chorus of accusation. Rather, we accentuate the positive and seek to cooperate on the many areas we have in common while respecting our differences.

"Faced with disconcerting episodes of violent fundamentalism, our respect for true followers of Islam should lead us to avoid hateful generalisations, for authentic Islam and the proper reading of the Quran are opposed to every form of violence."
(Pope Francis, Evangelii Gaudium, 253)

Throughout a long history of association, Christians and Muslims have experienced both harmonious co-existence and also conflicts. Columban missionaries in Britain, Fiji, Pakistan, the Philippines, and increasingly in Australia, New Zealand and the United States, recognise both the potential and the threat involved.

“Over the centuries many quarrels and dissensions have arisen between Christians and Muslims. The sacred council now pleads with all to forget the past, and urges that a sincere effort be made to achieve mutual understanding; for the benefit of all, let them together preserve and promote peace, liberty, social justice and moral values" (Nostra Aetate, 3).

When Christians work together with Muslims, with believers from other religions and with all people of goodwill, our shared commitment, collective effort and combined resources make us more effective at building a culture that fosters world peace.

For more information on interreligious dialogue, what it is, why dialogue, scriptural texts, bibliography and other resources, see:  http://columbanird.org/interreligious-dialogue/.

For an annotated list of teaching document on interreligious dialogue from the Roman Catholic Church, from the World Council of Churches, from other churches, from other religions and from civil society, see:  http://columbanird.org/teaching-documents/.