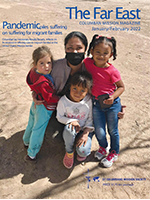 Read the current issue of The Far East - January/February 2022