After an absence of over 30 years and with a warm welcome from Bishop Francis of Myitkyina, Myanmar, Columban priests will be soon returning to work in this diocese. A new Columban team, comprising priests and lay missionaries will once again begin to serve the people of Myanmar. Columban Sisters returned to the Diocese of Myitkyina in 2003.

The Columbans began missionary work in Burma (Myanmar) in 1936 among the Kachin tribal people in northern Burma. By 1939, the Columban area had became the Prefecture Apostolic of Banmaw (transition stage to becoming a diocese) under Columban Bishop Patrick Usher and was served by 38 Columban priests. This area became the Diocese of Myitkyina in 1961, with Columban Bishop John Howe as the first bishop of the diocese. 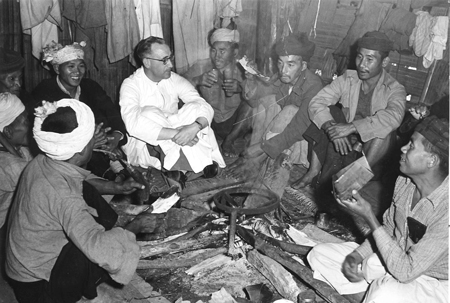 In 1966, the Myanmar Government ordered all missionaries who had arrived after 1948 to leave the country. No new missionaries would be allowed. In 1977, Bishop Howe consecrated Fr Paul Grawng as the new Bishop of Myitkyina. Fr Paul had been ordained in 1965 by Bishop Howe as the first Kachin priest. The last three Columban Missionaries left Myanmar in 1979.

In 2012, Fr Sean Conneely visited Bishop Francis of Myitkyina, Myanmar (former Burma). He discovered that Bishop Francis, the priests  and the people of his diocese have many fond memories of the Columbans. 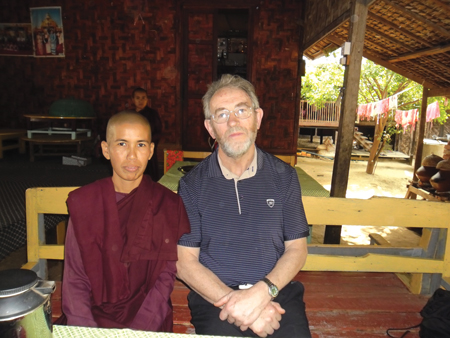 It was a great honour to be asked by Bishop Francis of Myitkyina to concelebrate Mass with him in the packed Cathedral of St Columban in Myitkyina. This Cathedral had been built by Bishop John Howe in 1960 and was next to the minor seminary built and run by the Columbans in the 1950s and 1960s. They are both now run by Bishop Francis Daw Tang and his local diocesan priests.

At the end  of the Mass, Archbishop Francis asked me to say a few words which he translated. I thanked them for their warm welcome to me, but even more so for their care, respect and love shown to so many Columban Priests and Sisters in the past.

Visiting Burma I encountered a respect and interest in the Columbans unlike any other place I’ve ever been in. They knew the names of all the Columbans who had worked there, where they were presently located, or when and where they had died. And in various places there were memorials to those who had worked and died in Myitkyina Diocese. 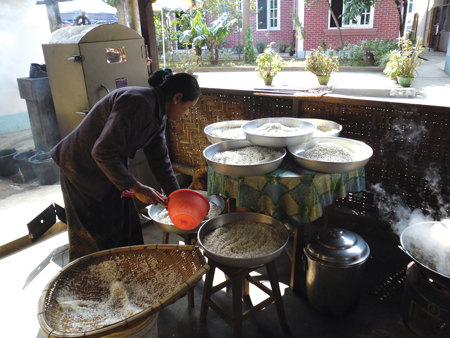 It was a tragic turn in history when the military-socialist government took over the country in 1964. They nationalized the schools and hospitals, and made it so impossible for missionaries to work there that the last Columbans decided to leave for health reasons in 1979.

Columban Bishop John Howe had been Bishop of Myitkyina Diocese at the time and was replaced by Bishop Paul Grawng in 1977.

Burma was one of the richest countries in Asia in the 1950s, exporting rice, jade, gold, rubber and teak wood. In the great Irrawaddy River it had a perfect natural highway running from the far North to the Indian Ocean. Now it must be one of the poorest countries in Asia.
As John, the Kachin driver, drove us along the dusty roads, I tried to imagine what it was like for all those Columban Fathers and Sisters who had to leave Burma prematurely in the 60s and 70s because of Government pressure. I shared my thoughts with Bishop Francis. “I was a young priest at the time,” he said. “I had grown up with the Columbans, and I was with the last group as they drove to the airport.

As we left the city their last wish was to be allowed to visit the graves of fellow Priests and Sisters who had died here. As they prayed tears ran down their faces like Spring rain. They were broken-hearted both to be leaving the people they loved, and to be leaving the graves of their colleagues behind them. They were leaving their life’s work unfinished; leaving their dreams, hopes and desires behind. Their churches, schools and clinics were being taken over by a Government hostile to Christian religion and values. Most of them felt they could never return again; most did not, a few did.”

But thank God the Church did not die among the Kachins, rather it flourished under persecution and is flourishing still. With Bishop Paul at its head, the 10 local priests of 1977 became 50. There are now two dioceses, three local Bishops and many religious priests and Sisters.

And above all there is a fervent and committed laity. I had the privilege of being with Bishop Francis at the opening Mass of the annual two-month education programme for 90 catechists and Church workers from the parishes of the Kachin State.

Ordinary men, who farm and labour in the mountain areas, take two months off every year to share and learn from each other. Some were delayed by war, strife and pillaging in their area. For others the roads were mined and so dangerous to travel. I only wished I had the language skills to hear their stories. When the annual session is over they return to their villages to lead their congregations in prayer, liturgy and catechesis, even while they work on their own farms and raise their families.

There is the possibility that Columban built schools will be handed back. The Government is beginning to see the need for an educated people. The Kachin Army is still fighting for more autonomy, and for a share of the mineral wealth of their areas.

The people have hope and with Aung San Suu Kyi now once more democratically elected as a State deputy, we can only pray their hopes will be fully realised.

Fr Sean Conneely SSC has worked in Korea for 40 years.