Water is a life and death issue (Part 1)

Given that the United Nations has declared 2013 "The International Year of Water Cooperation" and that March 22 each year is "World Water Day", we have decided to focus in following two-part article on the important work of water conservation of  Columban Fr Tomás King in Pakistan. His parish is located in the remote and arid Thar Parkar Desert in the south east of Pakistan and is comprised mainly of an impoverished and oppressed tribal people called the Parkari Kholis who are spread out in small villages across the desert. He shares with us the life and death struggle of the Parkari Kholis for a reliable and adequate water supply and the efforts of the Church in trying to address this need through water conservation techniques. Women play a difficult role each day in the collection of water. He also reflects on the possible effects of mining in the Thar Parkar Desert and the role of climate change and water conservation. 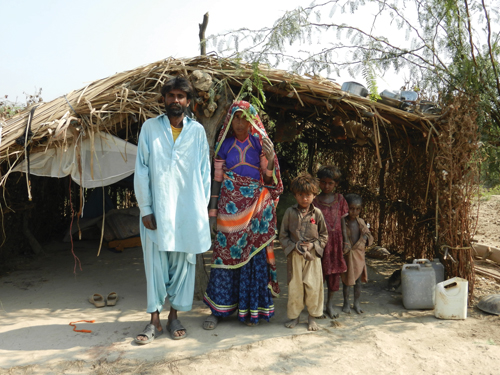 The Parkari Kholis are a low caste Hindu Tribal People whose homeland is located in the south east of Pakistan, in the Thar Parkar Desert whose centre is the small town of Nagar Parkar. It is just three miles from the border with India. Thar Parkar is Pakistan’s largest district at nearly 20,000sq.kms and comprising an estimated 2,350 villages. The desert also extends into India. It is extremely poor with an estimated population of one and a quarter million people.

The majority of Parkari Kholis live in India. Since independence and the partition of the Indian Sub-Continent in 1947 they are a partitioned people, living on both sides of the artificially created Pakistan/India border.

In Pakistan they are referred to as the non-scheduled caste, which bears the connotation of untouchable. This has led to entrenched discrimination and oppression down the centuries.

There has been a Christian presence in the town for more than 30 years through the Boys Boarding Hostel run by the Diocese of Hyderabad.

The town has the only government high school in the area so if there were no hostel facilities it would not be possible for these children to continue their education beyond primary level.

In addition there are 25 outlying villages, each of which has a small number of Christian families, totalling about a hundred in all.

Numbers wise it's a small parish but geographically large, so I spend on average 10-12 days a month there.

The mission to Nagar Parkar itself was established in the early 1960s by Franciscan Friars. It was then a difficult and hazardous mission.

It entailed a seven day trek across the desert from interior Sindh by camel.

With the coming of the 4-wheel drive jeep, this was reduced to a 12 hour journey. With the new road the desert can be crossed in four hours, though most villages are still only accessible by 4-wheel drive jeeps. 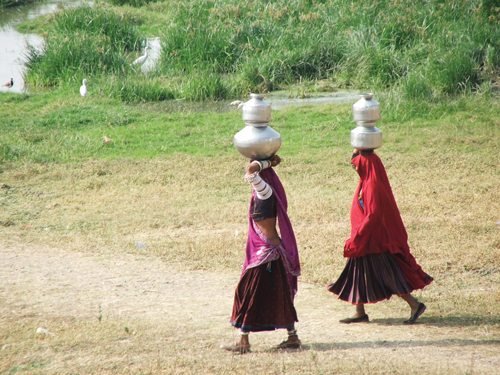 Road infrastructure is slowly developing, which is cutting down the travel time. One reason for the construction of new roads is to facilitate the government and business exploitation of the natural resources in the area. This includes marble in the hills surrounding Nagar Parkar and coal under large areas of the Thar Parkar Desert.

There is also white china clay used in the making of ceramics. The already scarce water used in processing of the white clay is seeping into the underground water-table and contaminating it.

It is hard not to see the same thing happening when the coal-mining begins as priority is not given to the impact on the environment that such mining causes.  Underneath the sands of the desert lies one of the largest reservoirs of coal in the world today. The country does not produce sufficient energy for its people’s needs and power cuts are a daily occurrence.

The coal has the potential to supply energy for generations, but at what cost? It is an ecological disaster waiting to happen. It is scientifically proven that the use of fossil fuels has contributed to global warming and climate change.

Many Parkari Kholis own land in Nagar Parkar but due to insufficient water supply a viable living is difficult. This forces the majority of Parkari Kholis to cross the Thar Desert into Sindh, to work for feudal landlords as landless peasants. They become indebted to their landlords so in effect are bonded labourers. A minority migrate back and forth, depending on the extent of the monsoon season.

Thar Parkar is not connected to the massive canal network that covers a lot of the country, so is dependent on rains during the July and August monsoon season. If the rains do not come, life becomes even more precarious than usual for people.

To have a fair chance of having a good crop, the monsoon rains need to come three times at intervals of three weeks or so over a two month period. If only one or two rains come, the crops are stunted which seriously affects production.

So water is a life and death issue in Thar Parkar. Despite heavy flooding in recent years there are intense water shortages in parts of the country. It is already a serious issue and will become more pronounced in the coming years.

Climate change, in the form of increasing temperatures, melting glaciers in the Himalayas and Hindu Kush Mountains in the north of the country and lower rainfalls are contributing to this. It is a situation that will worsen if the country's 170 million population doubles as it is projected to do so in the next 25 years.

Women in Thar Parkar, as in many parts of the world, are charged with the task of collecting water. When it becomes scarce they have the even more arduous task of travelling longer distances to collect it from tube-wells.

On summer days temperatures can be as high as 48oC. The falling water table means that water needs to be drawn from depths that can reach 200 feet. So it is easy to imagine the consequences for women who may be pregnant or malnourished.

Continue to next page…(read more)