There was a military coup in Paraguay on this day in 1954.

It is just one item in a very long list of coups or attempted coups to be found on Wikipedia.

The first one listed took place in 876BC in Israel and the most recent was in Burkina Faso in 2022.

One that has impacted directly on Columbans took place in Myanmar in 2021. Resistance to the government there continues but is being met with brutal force by the military, who have been engaged in a decades long attempt to control minority groups like the Kachin people.

we pray for all those parts of the world where changes to government do not happen through elections but by military takeovers.

We pray especially for Myanmar.

We ask that people will be given back the power to decide who will lead them.

Where there are oppressive governments in place, we ask that peaceful ways may be found to hand over power to a more representative form of government. 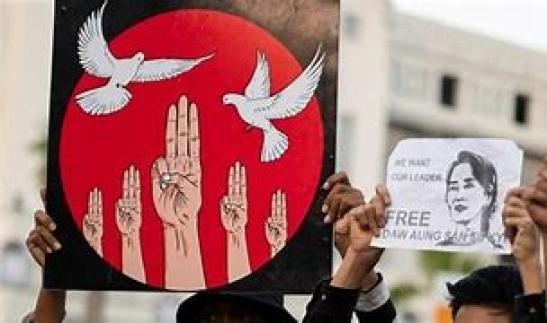 Protests in Myanmar against military rule.