Joan of Arc was burnt at the stake by her English captors in 1431. Just 19 years of age, she was accused of heresy and witchcraft.

A rehabilitation trial in 1456 found the original verdict to be unjust and deceitful -as we might say today it was politically motivated.

After her death she was regarded as a martyr and a folk saint by the French people.

it seems a bit strange that a warrior maiden who was executed as a heretic and a witch is now a saint.

However, we know from our tradition that not all saints are alike and that they serve God in different ways.

We pray that Joan’s commitment to do what she believed God was calling her to do may inspire others to seek out and do God’s will.

May we remember that we are followers of one who was also unjustly and deceitfully condemned to death. 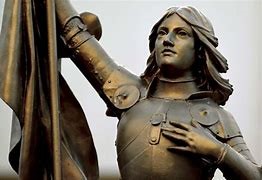