A rugby match between Waikato and South Africa being played in Hamilton on July 25, 1981 had to be abandoned after anti-apartheid protesters invaded the pitch. It was one of a number of incidents that happen during the 1981 tour by South Africa which deeply divided society in New Zealand.

In Wellington on July 29 a protest near Parliament lead to what is called the Battle of Molesworth Street when police armed with long batons sought to disperse the crowd. The tour brought to light hidden issues of racism and bigotry in New Zealand. The All Blacks and the Springboks did not play each other again until 1992 when apartheid was abolished.

we ask your help with all of the issues that can easily divide societies and cause conflict.

We give thanks for the end of apartheid in South Africa.

We ask that all the efforts being made at the present time, including those being made in sports, to end racism will be successful. 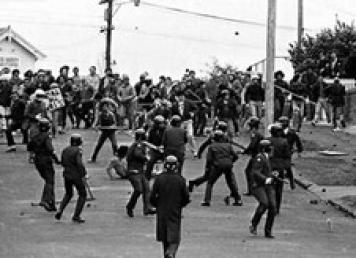