On August 7, 1978, thousands of mourners filed past the body of Pope Paul VI who died on the previous day. Elected pope in June of 1963 to succeed Pope John XXIII he brought Vatican II to completion. He produced some very significant encyclicals including Ecclesiam Suam, (Paths of the Church), Humanae Vitae (On the Regulation of Human Births), Mysterium Fidei (Mystery of Faith - On the Doctrine and Worship of the Eucharist) and Populorem Progressio (On the Progression of Peoples). He was succeeded by Pope John Paul I. On October 14, 2018, Paul VI was canonised by Pope Francis.

Rock of Ages we give thanks for the life and ministry of Pope Paul VI.

We ask your continued blessing on our present Pope Francis as he seeks, all these years later, to implement the reforms put forward by the Second Vatican Council.

Guide the church founded on the rock of Peter through these times when there is so much unrest, hostility and suspicion in our world. 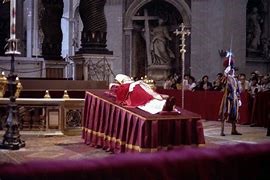