On August 6, 1945, an atomic bomb was dropped on the city of Hiroshima in Japan. The bomb exploded with massive force. The resulting reaction engulfed the city in a blinding flash of heat and light. The temperature at ground level reached 7,000 degrees Fahrenheit in less than a second. The bomb vaporized people half a mile away from ground zero. The exposed skin of people miles away burned from the intense infrared energy unleashed. At least 80,000 people died instantly. 3 days later a second bomb was dropped on Nagasaki.

we ask your blessing at this time when The UN Secretary General, Antonio Guterres stated that amid rising global tensions, "humanity is just one misunderstanding, one miscalculation away from nuclear annihilation”.

May the remembrance of what happened in Japan persuade people never to use these weapons again.

Help all who are working for peace and justice in our world. 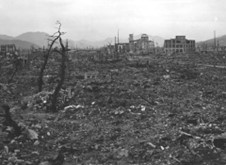