The first of a series of conventions was signed by 12 nations in Geneva on August 22, 1864. The development of the Geneva Conventions was closely associated with the Red Cross, whose founder Henri Dunant, initiated international negotiations that produced the Convention for the Amelioration of the Wounded in Time of War, which was the focus on the first set of conventions.

This provided for (1) the immunity from capture and destruction of all establishments for the treatment of wounded and sick soldiers and their personnel, (2) the impartial reception and treatment of all combatants, (3) the protection of civilians providing aid to the wounded, and (4) the recognition of the Red Cross symbol as a means of identifying persons and equipment covered by the agreement.

we give thanks for the Red Cross and for the Geneva conventions and the protection they offer in times of war.

We ask that all nations respect and follow these conventions.

We pray for those areas of our world where these conventions are not respected and where other international agreement are ignored. 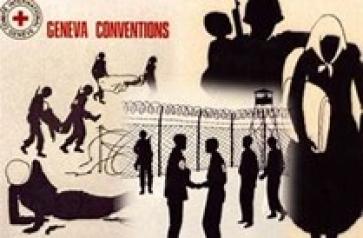