One of the deadliest typhoons in China’s history made landfall near the city of Swatow on August 2, 1922. It is estimated that about 5000 people died in the city and another 50000 in the surrounding areas.

In the early years of the Columbans in China they had to deal with many storms and floods. In August of 1931 Bishop Galvin wrote of the dreadful plight of people in Wuhan, mentioning that the Yangtze River was 53 feet higher than its normal level.

we ask you to be with all who are suffering because of storms and floods in our world.

Be with those who, at the same time in other parts of the world, are suffering from drought and fires.

As extreme weather situations increase in frequency and intensity, we ask that an awareness of the loss of life and huge damage to homes and land that these conditions bring will prompt action to save our planet. 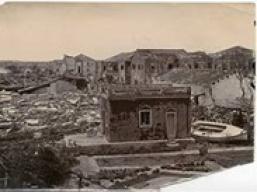 Swatow City after the typhoon