On August 18, 1971, New Zealand's Prime Minister, Sir Keith Holyoake announced New Zealand combat forces would be removed from South Vietnam in the next few months. Australia made a similar announcement on the same day. More than 3000 New Zealand military and civilian personnel served in Vietnam between 1963 and 1975.

In contrast to the world wars, New Zealand’s contribution was modest. At its peak in 1968, New Zealand’s military force numbered only 548. Thirty-seven men died while on active service and 187 were wounded. Two civilians serving with the surgical and Red Cross teams also lost their lives.

we pray for all who suffered because of the war in Vietnam.

We ask for help for those who are suffering from Post Dramatic Stress Disorder and for those who have had to deal with long term injuries/disabilities as a result of war.

We pray for peace in all the areas in our world where there is war and conflict. 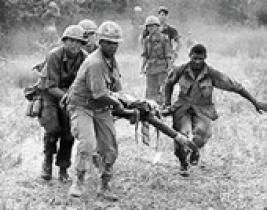