The announcement that Japan was surrendering unconditionally was made by Emperor Hirohito on August 15, 1945. It was formally signed on September 2.

It followed the use of the atomic bomb on the Japanese cities of Hiroshima and Nagasaki in early August. The announcement brought an end to the WWII to the great joy and relief of all who had been caught up in it or effected by it.

we give thanks for the end to WWII.

We ask that there be an end to the wars and conflicts that are still happening in various parts of the world like Myanmar and Syria.

Given that the challenges we face have serious implications for everyone we pray for increased cooperation and respect between nations. 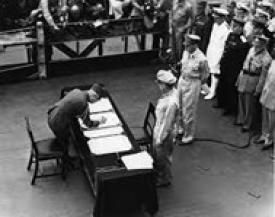