On 14 August 1960 the United Nations Security Council passed Resolution 143 calling upon Belgium to withdraw its troops and authorizing the Secretary-General to provide the Congolese Government with military assistance. At its peak, UN forces in the Congo numbered nearly 20,000 military personnel from over two dozen countries, led largely by India, Ireland, and Sweden.

I remember as a child hearing stories about the 9 Irish troops who were killed in an ambush in November 1960. It was the first time that Irish soldiers served as UN Peacekeepers.

we pray for the people of  DR Congo who continue to suffer from political unrest, disease and poverty.

We pray for all peacemakers and peacekeepers that their work will help bring an end to conflict and establish true peace within and between nations. 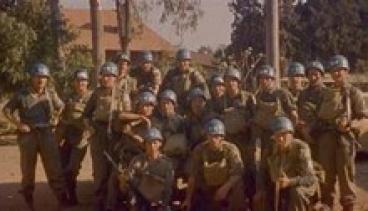 Irish soldiers to go to the Congo