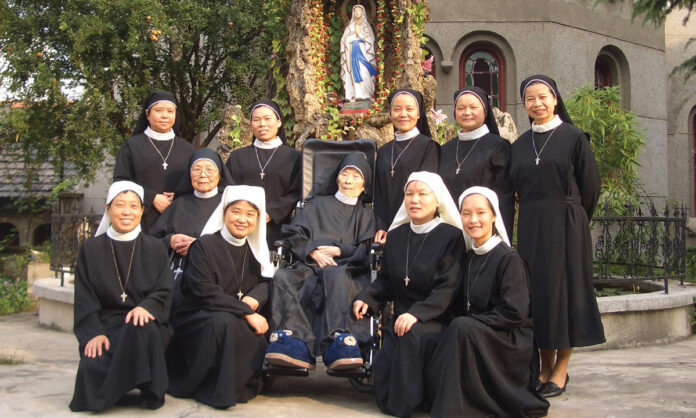 The Sisters of Our Lady of Hanyang gather in the grounds of their convent in Hanyang. Photo: Fr Dan Troy

In Wuhan, central China, where I live, I frequently visit the Sisters of Our Lady of Hanyang, a diocesan congregation founded by Bishop Edward Galvin, co-founder of St Columbans Mission Society, writes Fr Dan Troy.

Their convent is located right beside St Columban’s Cathedral, a short distance from the spot where the Han River enters the much bigger Yangtze River. Almost as impressive as the Yangtze River is the towering 550-year-old ginkgo tree that stands across the road from the convent.

Under its shadow lies the original hospital run by the Missionary Sisters of St Columban until the late 1940s, now part of an expanded complex known as the Wuhan Number 5 Hospital. This hospital was designated to receive patients suffering from coronavirus.

Hanyang’s famous ginkgo tree has witnessed many historical events. Dynasties have come and gone, floods have risen and abated, and wars have taken their toll on the people. Now, as the tree stands leafless in another winter, it is witnessing an event that poses as big a challenge as any before. Considering its venerable age and all that it has survived, it is no surprise that the tree is now protected in a neat compound. An elderly couple living in a small house at the compound entrance ensures that the tree and its history will live on.

One of the events the tree witnessed was the floods of 1931. After prolonged summer rain, combined with torrents of meltwater from snow on the heights of the faraway Himalayas, the Yangtze River burst its banks in Wuhan and many areas outside the city. Refugees from devastated rural areas moved to Wuhan in the hope of finding relief.

But in a city struggling to cope with floodwater, taking care of refugees was deemed a task beyond its capacity. Acutely aware of the desperation of the newly arrived refugees, Bishop Galvin began coordinating a relief effort. This effort involved providing shelter, basic food supplies, and medical care for tens of thousands of people.

For some, the only available accommodation was in small tents as they huddled together on Black Hill, a mound of ground that still stands beside the Han River as a silent reminder of that terrifying time.

With limited resources and only boats to transport supplies, the 1931 relief efforts gradually became established thanks to all available Church personnel becoming involved, including a group of teenage girls.

The dynamic role these young Catholics took on considerably bolstered the relief efforts, and their contribution warmed the heart of Bishop Galvin in a way that was to prove providential. Six months later, as the relief effort reached a gradual conclusion, Bishop Galvin began preparing the way for the founding of a new diocesan congregation of sisters. The first members of the new congregation came from the teenagers who had shown such selfless dedication during the flood relief efforts.

Then in the late 1940s, political upheaval forced a tearful bishop to advise the Sisters to go home to their families and, if they wished, get married. Their departure from the convent was a day of bitter sorrow for all.

Forty years later, as if to prove that nothing is impossible for God, eight of these women returned to Hanyang one by one and began living in a simple residence within the parish compound. A few years later, the church reopened.

In the years since 2001, I have often shared meals with five of these elderly Sisters at their convent. They were undoubtedly women of deep faith who had seen the full range of possibilities that life can put before anyone. Their humility and trust in God’s ongoing protection in the face of extraordinary historical events could only be admired. 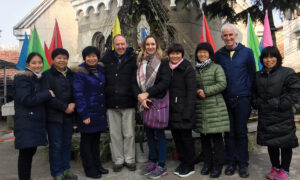 Fr Troy with Sisters and visitors at the convent in Hanyang. Photo Fr Dan Troy.

A few years ago, the last remaining Sister of that generation, Sr Li Fenfang, died. She was 99 years old. As if to underline how God does work in mysterious ways, the life of the congregation continues through a younger generation of Sisters who joined since the mid-1990s and now provide dedicated care for the older sisters as age becomes an increasing factor in their lives.

During the peak of the coronavirus in Wuhan, the younger members of the Sisters of Our Lady of Hanyang looked across the road at the hospital where patients were being treated. Living under the same restrictions of movement imposed on everybody else throughout the city, they could not become directly involved in the care of patients or their families. Nonetheless, the Sisters found a way to contribute. Some parishioners had family members who had contracted the virus. The Sisters supported them through regular communication and contacted friends to seek financial support for projects connected with the medical emergency.

Faithful to their commitment as a congregation, they also committed themselves to extended hours of prayer for those most affected by the coronavirus, sometimes praying throughout the night. While living with restrictions was unavoidable, the location of the Sisters’ convent so close to the hospital has given their prayerful presence a deep symbolism.

Each day the Sisters’ prayers merge with the prayers of so many other people. Through it all, Hanyang’s impressive ginkgo tree, branches bare, stands calmly like a silent witness to the hive of urgent medical activity a short distance away.

We will certainly rejoice and give thanks to God if the faint emergence of new leaves on this giant tree coincides with a turning of the tide in this latest challenging chapter in the history of central China. The leaves did emerge, and the tide did eventually turn in the city of Wuhan.