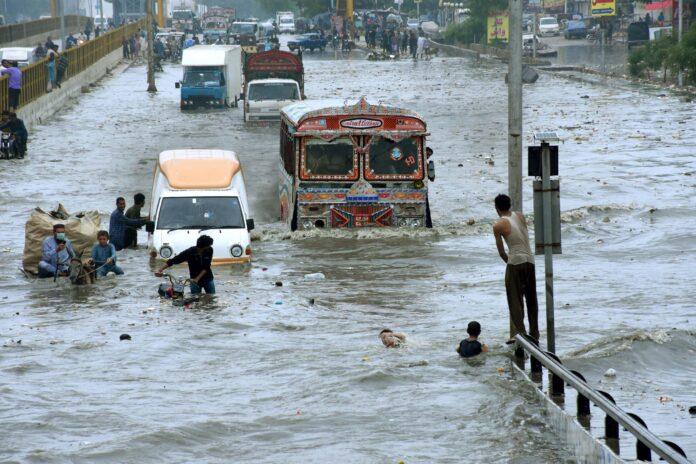 From the heights of the Himalayan Mountains and the Khyber Pass, to the city of Karachi on the shores of the Arabian Sea, floods triggered by very heavy rainfall have continued to wreak havoc throughout the country. This has resulted in leaving death destruction and misery in its wake. THE CLIMATE HAS CHANGED. A month-long severe heat wave in April/May as well as a hot May to June paved the way for Monsoon record rains. To date the Sindh Monsoon rainfall is around 700 mm which is about over six times the normal Monsoon rains of 109mm. The neighbouring Province of Baluchistan, which has also been very badly affected, is up about 5 times its normal Monsoon rains. The National Disaster Management Authority at this time report the death toll to be over 1,100 people, approximately 287,000 houses destroyed, with another 662,000 houses damaged.

It is estimated that that 15 per cent of the population are directly affected by the floods. This therefore means about 33 million people. Thousands of acres of crops have been destroyed. The cotton crop has suffered very badly. Poor peasant farmers have therefore been given a bad blow with this loss of their share of the crop. Many of the village houses are made of sticks, thatch, and mud, so they are particularly vulnerable. So many roofs collapsed in cities and villages, resulting in many instant deaths. Many villages have been wiped out by the invading flood waters. It is estimated that 735,000 livestock, consisting of buffaloes, cows, sheep, and goats have drowned or perished from the floods. A television network showed a ‘clip’ of a herd of about 25 buffaloes being carried down the fast flowing flooded mighty Indus River. To our horror we saw journeying with them 6 committed companion cow men clinging to them. We are wondering what happened to the men and buffaloes!!!! Goats numbering 70 were reported to have died instantly from a lightning strike. 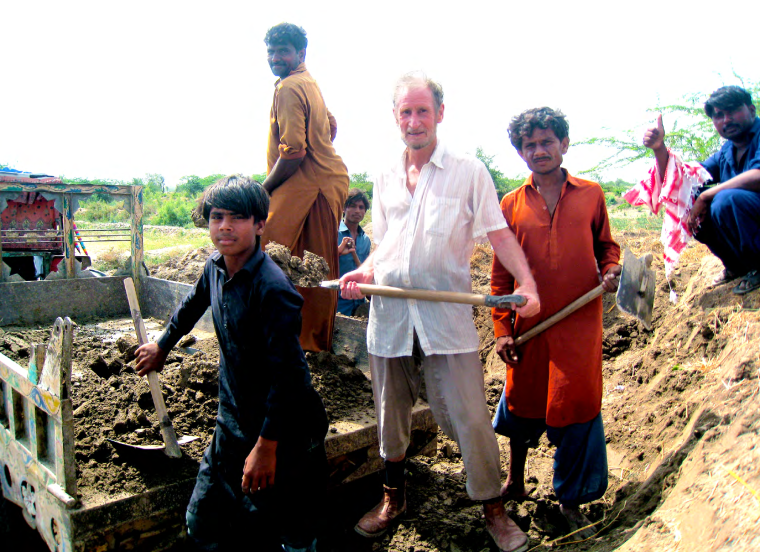 A terrible tragedy was reported to us by a comrade, Dani Baksh, who lives in a neighbouring town, that 17 men were out fishing one morning recently in the Arabian Sea waters. A bolt of lightning struck their boat resulting in the death of all on board. Their families and friends are deeply saddened and distressed at the loss of their loved ones and food suppliers..... Too many children and adults have either been killed by “sky electricity”, (lightning), or from electrocution caused by faulty electric installations. One boy was electrocuted while walking through rainwater due to electricity having been conducted from a street light pole.

A couple of hours from Karachi City are many small underground coal mines. The coal miners go down the shafts and work in primitive and dangerous situations. Sudden monsoon rains resulted in water pouring into the mines where the men were working, and several were drowned.

One day while travelling on my trusty Honda 70 motor bike, I stopped for a rest off the road. With so much rain, even this normal barren area had sprung into life with lush green grass. I met a simple shepherd and his sons who were pasturing their sheep. We had a conversation while sharing some bananas. The father exclaimed. “We have come from the Keti Bunder area because the land there is flooded.” (He put his hand to his thigh to indicate the depth of the water there.) “Toba, toba”, (repent, repent), he said while putting his hands to his ears. “Allah forgive us, we are sinners.” “When will the rains finish?” I ask him. “The One up there knows.” He replied, while raising his hands in the direction of the sky. I felt very moved by his wisdom, faith and genuineness. He may not have heard of Climate Change, yet in a profound way he had captured what it is. 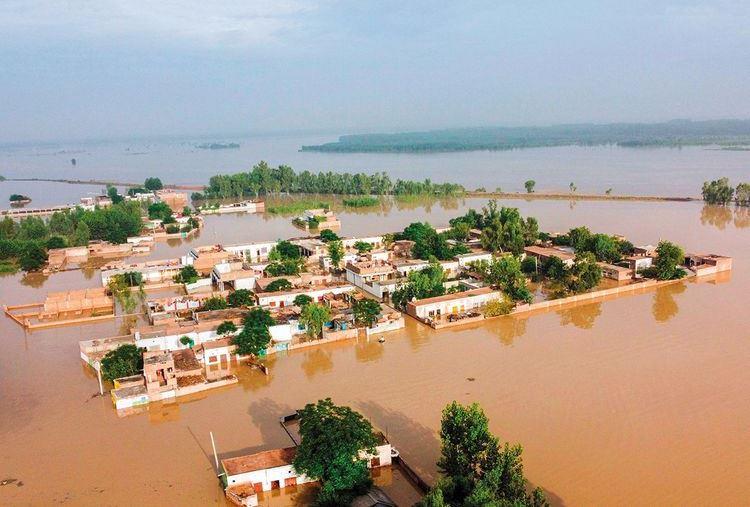 There has been a mass movement of especially rural people, shifting from their villages to higher ground, often along roads which are the only dry areas in a sea of water. They take with them what they are able - belongings, animals and loved ones. Government and N.G.O’s, Caritas, and others have provided some necessities such as food rations, mosquito nets, drinking water, tents and health care. Chaotic scenes do result in the pushing and shoving of the hungry crowds when aid does arrive. Demonstrations have been taken out over the failure of the authorities concerned to deliver the necessary provisions. Many generous souls do come to their assistance and the people appreciate whatever is given. Pakistan has appealed to the world community for assistance and there has been some response to their cry for help. Many local places have been set up appealing for aid, with “full volume”, load speakers crying out for urgent help to be handed in such as food etc.