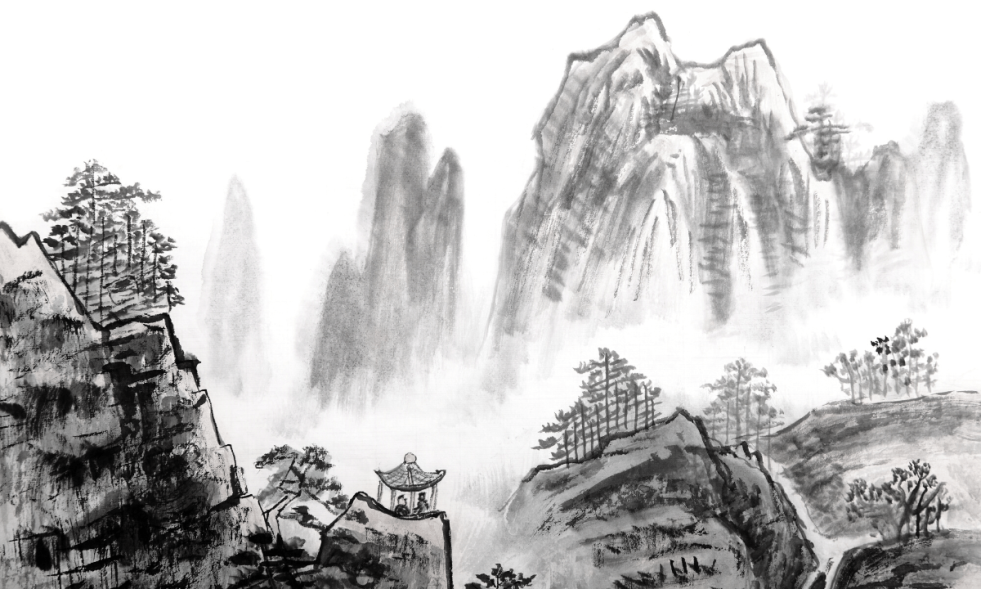 A closer examination of scenes of sweeping clouds, towering mountains, churning waterfalls and expanses of trees reveals small features that actually represent people, easily missed in the casual glance. The contrast in scale between the people and the natural world represents a clear understanding by the artists of the need for humans to be humble within the natural world.

The rapid economic development of China over the past 30 years seems to be moving its people along a path quite divorced from the representation in these deeply traditional paintings. Most people in China realise economic development has taken a toll on the natural world. Public notices promote the need for a low carbon lifestyle, but these efforts to influence thinking are overwhelmed by the stylish advertising for new cars and other aspects of the desired lifestyle of our era.

The United Nations-sponsored Convention on Biodiversity (Conference of Parties - COP15) will take place this year in Kunming, China. The capital of Yunnan province is almost 2,000 metres above sea level and popularly known as Spring City, due to its moderate year round temperature. The mountainous province is also home to many of China’s ethnic minorities.

China’s vast landmass gives it a huge variety in climate and ecosystems. Whether it is the tropical island province of Hainan, the fertile plains of the Yangtze Basin, the western deserts or the bitterly cold northeast in winter, the full spectrum is represented.

Natural history books and television programmes highlight the interest people have in the land and life systems of their surrounds. But as in many other countries where good intentions abound, the challenge in China seems to be finding a way of life that provides for the people, without damaging the natural world. However, its continuously expanding economy leaves finding a balance an elusive challenge.

The Convention on Biodiversity provides China with an opportunity to facilitate a step forward for the entire world in this crucial area of the life of our planet. Scientists agree that today’s extinction rate is hundreds, even thousands of times higher than the natural baseline rate. A tragic leaking of the life of our planet is taking place, each species dropping over the cliff of extinction, never to be seen again by our or any future generation.

China has made huge efforts to conserve the panda. A great symbol of the Middle Kingdom, it shows how one species can capture the public imagination. What we probably fail to keep in mind is that all species, irrespective of size or beauty, are as mysterious and unique as the panda.

While it is encouraging that a delegation from the Vatican will attend the convention in Kunming, representation from the Church in China is highly unlikely. Promotion of the event among Church people will probably be small scale, due to the closure of the nationwide Faith Newspaper in mid-2020 and a winding down of the main websites run by the Church.

Nevertheless, some creativity in sharing news about the convention will help the multiple Catholic mobile phone chat groups to facilitate some sharing of relevant information and highlight it as an area of concern for the universal Church.

Last September, a Columban initiative saw seven religious sisters in China begin a nine-month online course in leadership, cosmology and ecology. Organised by the Deeptime Network in the United States, the weekly classes provide an opportunity to engage in study and discussion with people in several countries.

The course made regular reference to the work of Thomas Berry CP  and the views of Teilhard de Chardin SJ, both of whom lived in China in the first half of the 20th century. It will be good if some of these sisters and members of other faith groups in China could take part in the Convention on Biodiversity or its fringe events.

On a more positive note, opportunities do exist for Church personnel in China to take part in educational activities related to ecological concern. During the past five years over 100 sisters, some priests and laypeople, as well as others with no connection to the Church, have taken part in ecological workshops guided by visiting Irish geologist and botanist, John Feehan.

The week-long workshops have provided the opportunity for participants to learn about the timescale and vastness of the universe, the diversity of the ecosystems on planet Earth, and the depths of beauty that are held in flowers and insect life as revealed through hand lenses and microscopes.

Faithful to the direction offered by Pope Francis in Laudato Si', the question posed by John during these workshops has consistently been, “What does this tell us about God?” Participants have already begun to share their insights by facilitating similar events. Further workshops are being planned.

The colourful Winter Olympics hosted near Beijing in February this year brought a realisation among many Chinese that the collective creativity of the international community is a necessity in other areas of life.

While there is a growing awareness of ecological issues within the Church in China and in wider society, it still feels that genuine efforts are similar in scale to the people represented in traditional Chinese paintings, small in comparison with what surrounds them, but nonetheless a meaningful part of what is happening.

Perhaps the upcoming Convention on Biodiversity in Kunming will see the emergence of an energy of Olympic proportions for people in all nations to contribute prophetically to the preservation of all forms of life on our fragile planet.