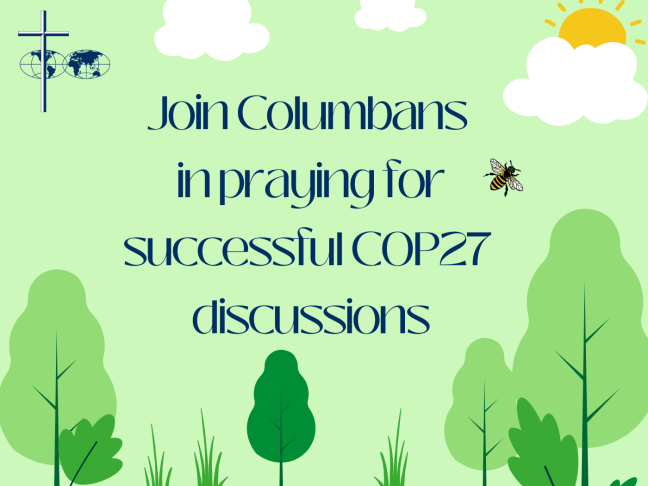 HONG KONG, November 15, 2022. On the occasion of the United Nations’ COP27 on climate change in Sharm El-Sheik, Egypt, (6-17, November) and the UN’s COP15 on biodiversity in Montreal, Canada, (7-19, December), Columban missionaries believe it is essential to listen to the cries of both people who are poor and living in vulnerable conditions and the wounded planet. The Columban International Leadership team of priests and lay missionaries takes this opportunity to lift up the voices that we hear every day in different parts of the world that will continue to experience every day the traumatic realities of climate injustice and biodiversity collapse.
Pope Francis says clearly in Laudato Si’, “Each year thousands of species of plants and animals disappear. Because of us, thousands of species will not give glory to God through their existence and will not be able to communicate to us their message. We have no such right” (LS #2). St. Columban delivered a similar message more than 1400 years ago when he proclaimed that “If we are to know the Creator, we must know creation.”. Superior General, Fr. Tim Mulroy says, that “In calling global leaders to account, we must also recognize and lament for the ways in which our lifestyles and institutional policies as Columbans fail to contribute to the well-being of the planet. We remain committed, however imperfect, to our on-going personal and communal ecological conversion.”
From March to September 2022, Pakistan lived through a seemingly endless six months of climate crisis – a month-long heat wave in April and May, resulting in increased glacial melt in the northern Himalayan mountains and followed by a devastating monsoon season from mid-June to the end of August. This resulted in the worst flooding ever recorded, killing over 1,700 people and affecting over 30 million others; untold human suffering, enormous damage to crops, livestock and infrastructure with the economic loss estimated at over $30 billion. Adding the rapid loss of biodiversity – plants, animals, ocean creatures, ecosystems – Pakistan is one of the countries that is most affected by climate change in the world. COP 27 and COP 15 represent a hope, if not a ‘last chance’ for countries like Pakistan, provided that the governments of the world take the actions they all know need to be taken. If they fail to do so, as the UN secretary-general, Antonio Guterres recently said We will be doomed”. Columban Fr. Liam O’Callaghan, Justice, Peace and Integrity of Creation Coordinator (JPIC), who has lived in Pakistan for more than twenty years say, “It is as stark and urgent as that”. 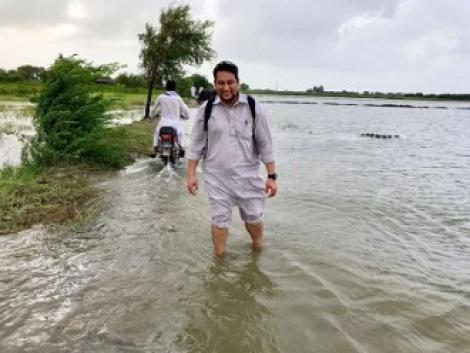 Fr Pat Visanti in flood waters in Pakistan
Fiji is another place where Columbans have seen life change for the worse in many ways for the people, the land and sea. Columban JPIC Coordinator in Fiji, Tevita Naikasowalu had this to say when asked what COP27 and COP15 means to him as an indigenous Fijian, “Bio Diversity – “Bula Veiwekani” – Bula means Life and Veiwekani – Relationships. Our Life and Wellbeing is dependent on all other Living things and my identity, Past, Present and Future is also theirs. This is to us - called the “Vanua.” The Ocean, Sky, Land, People and the Sea are all connected and are One. This is what Bio diversity means to us. For there can be no Bio Diversity if there is no relationship. There can be no trees without the land no fish without the ocean because there has to be a relationship that connects this Web of Life. We cannot be without the other and what is good for them is also good for us and if harm is done to them, it is also done to us.”  With the advancement of deep seabed mining in the region, the vanua only promises to experience greater suffering resulting in ever-increasing vulnerability for the majority of people and the islands. 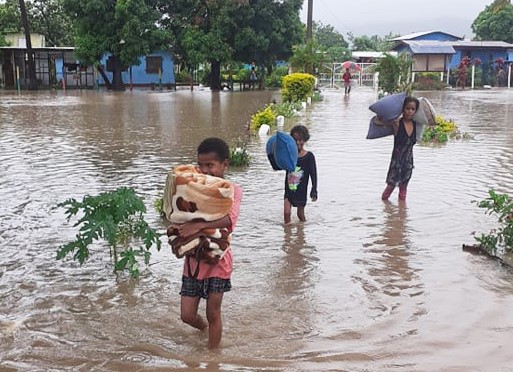 Flooding in Fiji
The Philippines is also bearing the brunt of human and ecosystem devastation from preventable conditions of climate change and biodiversity collapse. Extrajudicial killings and targeting, also known as ‘red-tagging’ of indigenous, environmental, faith, youth, and community leaders, and journalists place them at high risk. According to Columban JPIC Coordinator John Din, “Every year we experience and see the wrath of back-to-back typhoons and super typhoons destroying the lives and livelihood of the people especially the poor and Indigenous People. Rich countries need to pay the reparation for the losses and damages suffered by people who contributed insignificantly to the current ecological crisis.”
Columbans in Chile as members of the Interfaith and Spiritual Alliance for Climate organized an interfaith and intercultural blessing for the country’s COP27 negotiators on November 3 in Santigo, Chile. This celebration was held in the context that Chile will co-lead, together with Germany, the debate on the loss and damage caused by the climate crisis in the world. As Environment Minister Maisa Rojas pointed out, "We are clear that no country will solve climate change on its own and that agreements between countries are the only way to face and deal with the effects of this crisis, which is already hitting the most vulnerable countries and people. According to Adriana Curaqueo, Director of the Columban Mission Center, “among the sentiments expressed during the event, the Mapuche communities present asked for "nehuen" (strength) and kimun (wisdom), and aimed to seek Kume Mongen (Good Living) in the negotiations.”
As part of our Columban ongoing advocacy and education efforts on climate change and biodiversity, we released Season 2 of our Jubilee for the Earth series. We will also be present in Montreal as part of an international interfaith delegation of faith leaders who will bring their spiritual messages of hope, respect, justice, and peace to the negotiations. The Healthy Planet Healthy People petition will be delivered at COP15. Our work is deeply informed and motivated by our lived missionary presence and endeavors in places where the devastation of climate change and biodiversity loss are felt right now, especially by people who are economically poor and fragile ecosystems.
We close by praying that the cries for justice, peace, healing, and flourishing of the earth and its people will be heard and heeded. We pray for the world leaders and civil society gathered at these two immensely consequential summits, that they will put aside national interests for the common good and commit to legally binding agreements which will lead to dramatically reduced carbon emissions and the protection of vulnerable species and ecosystems. To say that the decisions made at both COPs will influence the trajectory of the planet immediately and for generations to come is not an overstatement. Let us all find inspiration in Pope Francis’ message to choose sobriety over consumption that “[sobriety] when lived freely and consciously, is liberating.” (LS 223)
Rev. Tim Mulroy, SSC Vida Amour Hequilan
Society Leader Columban Lay Missionary International Leader 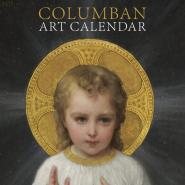