When Francesco Maglioccola, an Italian architect, arrived at Holy Family Catholic Church in Wuhan in 2014, he immediately asked if there was anybody who could explain to him the architectural history of the parish church and the nearby seminary. Coincidently, one of the priests from the seminary was standing nearby, his five years of study in Rome giving him the ability to respond in Italian to Francesco's enquiry. 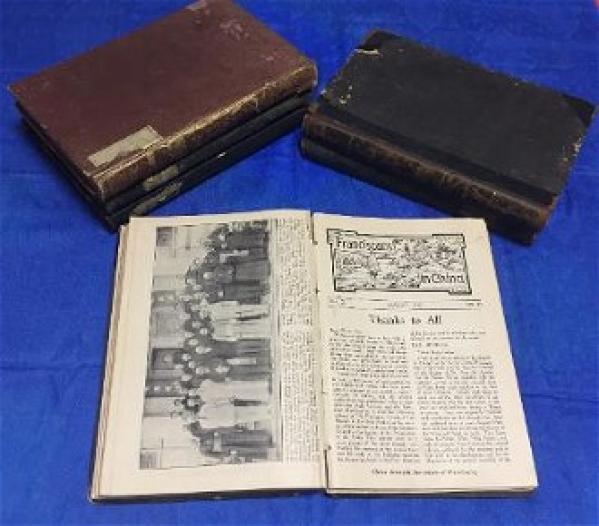 During the next few years Francesco researched the Italian influence on the architectural history of the city, often bringing his Chinese university students to look at the details of churches and civil buildings. The international history of the city stems from it being a transport crossroads in China. The country's first north-south train route intersects with the Yangtze River in Wuhan.

Francesco's ongoing research led him along several interesting avenues. During his regular visits to an old library at St Joseph's Cathedral in the Hankou area of the city, he located seven volumes of bound magazines that were published by the Franciscan Friars of St John the Baptist Province. The seven volumes pointed towards a unique missionary publication in China. The dates indicated that the seven volumes were part of a larger set that was published in the Wuchang area. What Francesco had found were magazines printed on a monthly basis in English from 1922 to 1942. Throughout those twenty years, the magazines were sent to benefactors in the US, a huge logistical undertaking. Those steady efforts ensured that donations would continue to arrive to this part of China to support the life of the missionary Church, especially the running of a large orphanage beside Holy Family Catholic Church, an orphanage that is still in existence today, but now run by the civil authorities.

Named as Franciscans in China, most of the magazine's content is about Franciscan life in the Diocese of Wuchang. Rather than using the name of one part of Hubei province in the magazine title, the creative use of the name China would presumably have had a wider appeal among readers. A similarly creative approach by the publishers to appeal to their benefactors is seen in the way the magazine confidently describes itself in a subtitle in early issues as being 'A Monthly Message from the Rice Fields of Central China'.

While Francesco was happy to have located seven years of the magazines, he was not content with a partially completed jigsaw. His innate ability to follow up on small breakthroughs would probably see him gain the admiration of Sherlock Holmes. He eventually found out that a full set of the magazines is available in the library of Catholic Theological Union in Chicago. The Franciscans in Cincinnati were contacted and permission was received to scan whatever was needed to complete the partial set that is in Wuhan.

In recent months the scanning of the missing volumes has been completed in Chicago, an undertaking with its own Franciscan connection because the work was carried out by Erlison Campos, a Franciscan student from Brazil who studies at the Catholic Theological Union.

Large printing facilities were scarce in China in the early 1920s. The dedication of the Franciscans must be admired due to the way they could set up a printing facility and publish a magazine on a monthly basis for 20 years. It would appear that the only disruption to the regular printing was a three-month period in 1931, the cause presumably being the immense flood that devastated central China during the summer of that year. The early magazines show the simplicity of printing in the initial years, a time when photographs were rarely printed. As the years progressed, photographs became a more regular part of the magazines. Some photographs are excellent records of well-known Church personnel from various parts of China visiting this part of China at a particular time in history.

The 20 years of magazines contain about four thousand pages of stories and photographs, most of which describe the lives of the Cincinnati Franciscans and the people in their parishes in central China. Enquiries are currently being made to reprint a few sets of the magazines so that they would be available to people in China who could use them for research. Initial viewing of the digital copies has attracted the keen interest of several people.

October of this year will mark the centenary of the publication of the first issue of the Franciscan magazine at a humble printing facility beside Wuhan's Holy Family Catholic Church. With all that has happened during the last century, it is a sign of hope and encouragement that the resources of a library in one part of the Catholic world can support the efforts of the Church in China to recover part of its history.

A traditional view within Chinese culture is that 100 years is a relatively short period of time, an acceptance that time may eventually lead to a more hopeful experience. Perhaps the same 100-year view is appropriate for this chapter of Church life in China, a time when one part of its own story is returning home.

Fr Dan Troy is a member of the Missionary Society of St Columban. He lives in China.