Who Walks With You - An Easter Reflection

Who Walks With You? 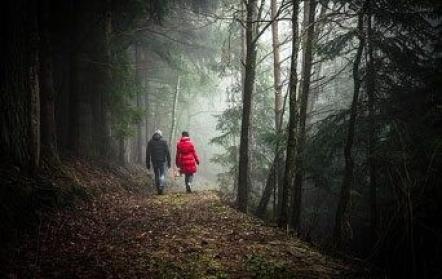 Why did the people who knew Jesus well in life not recognise him after he rose”?  This curious question arises as we hear the Resurrection stories in this Easter season.  Mary mistook him for the gardener while we are told that something prevented the two disciples on the road to Emmaus from recognising him. The larger body of the disciples needed to be reassured that they were not seeing a ghost.

I wonder if it had to do with expectations. Mary came to the tomb expecting to find the body of Jesus. Confronted by a living person she assumed it was the gardener because she was in some way prepared for that kind of encounter.  That she would encounter Jesus was not really in her expectations. Even if Jesus has spoken about rising, who could have known what to expect from an event so far outside the realm of human experience? The disciples heading to Emmaus were people whose hopes and dreams had been totally shattered – a feeling expressed so powerfully in three sad words “we had hoped”.   They assumed that the stranger who joined them and seemed to know nothing of what had happened in Jerusalem these past days was just that – an uninformed stranger.  They filled him in on all that had been going on.

When they did recognise him, it did not seem that it was his physical appearance that was crucial. It was how he spoke and how he acted.  It was the way he said Mary’s name and the way he broke the bread and explained the scriptures. These characteristic actions of Jesus opened their eyes and allowed them to recognise him.

With these thought in mind, I came across a piece by Chris McDonnell from Catholic Times entitled “Who Walks With You”.   The article mentioned that in the final part of The Waste Land, T S Eliot asked the question:

“Who is the third who walks always beside you?

When I count, there are only you and I together

but when I look ahead up the white road

there is always another one walking beside you….”

He adds “there is always that other presence on our journey, unrecognised and sometimes unrecognisable, the Risen Lord”.  He goes on to ask about those who have walked with us providing companionship, comfort, support, and an attentive ear in the desolation caused by the pandemic.  Were they just healthcare staff, supermarket workers, kindly neighbours, concerned family, or even total strangers? Could it be that in our encounter with these people the Risen Christ was walking with us. He also points out that as we struggle with the effects of the pandemic, we are like the two disciples on the road in that “we are asked to walk on an unfamiliar path where so much has changed and we are constantly looking over our shoulder, yearning for what we have lost, uncertain of the path that lies ahead”.

Because of our belief in the resurrection, we expect that we might encounter the risen Lord in people that we meet, in the beauty and mystery of creation and in the things that happen to us.  But even though we are prepared, there can still be things that prevent us from recognising him. We pray that our eyes will be opened.