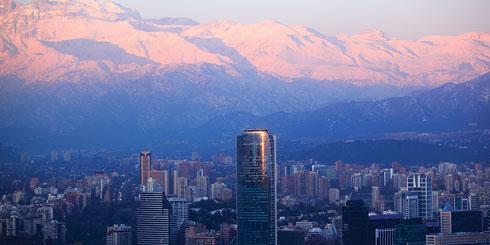 In 1953, three Columban missionary priests were sent from Peru to manage the parish of San Andres in Santiago, Chile, in an effort to develop Christian communities in the continually growing, poor housing tracts on the outskirts of Santiago. The Columban Missionaries arrived to a Catholic Church experiencing a crisis common in much of Latin America - an acute shortage of priests and religious. Although Catholic, the people knew little of their faith and practiced even less.

Over a fifteen year period, the Columban effort grew from one to seven parishes and from three to twenty-eight Columbans and priest associates caring for 200,000 people. They started with small wooden chapels that were gradually replaced by more substantial chapel community centres.

In the mid-1960s, to cope with the increasing mass of people, a new pastoral plan to build basic Christian communities was adopted and a new catechetical program was introduced. The latter prescribed preparation courses for Baptism, First Communion, Confirmation and Marriage. This pre-sacramental preparation was put in the hands of trained lay people.

Where once the priest was the sole religious force in a parish, zealous lay men and women now provided for the spiritual needs of their brothers and sisters.

For the Columban missionary priests, this meant a new role of guiding and supporting an eager laity as well as working with a hundred hands instead of two.

Columban mission in Chile was carried out during a time of dire poverty, resulting from lack of employment and education, and within a volatile political period that often caused violent social unrest. The violent political and economic turmoil brought many hardships and much suffering for the people of Chile. Much poverty still exists today although the political climate is now much more stable.