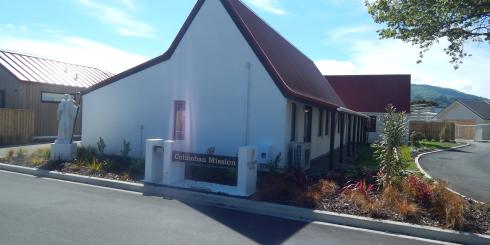 Our office is situated at 18 St Columbans Grove, Lower Hutt.  Our priests live nearby in five residences located on Francis Douglas Way.

The Missionary Society of St Columban was established in New Zealand in 1943. Since the founding of the Society in 1918, 51 New Zealanders have been ordained. Thirty seven have died and the remaining 14 work in Hong Kong, Pakistan, Taiwan, South Korea, Japan, Fiji, Peru and Aotearoa/New Zealand.

Since 2018 we have had an active Columban Lay Mission Program. The first two lay missionaries from New Zealand, who recently completed their formation program in Fiji, have been assigned to the region of Britain.

We seek to nurture the missionary spirit of the local church.

Columban Mission Aotearoa/New Zealand focuses on Mission Education and fundraising, especially through the distribution of The Far East magazine and the Columban Art Calendar. We also send out mission appeals mid-year and Christmas.

Concern for social justice and the environment are part of our experience and response to global mission so we work with individuals, groups and organizations that deal with these concerns.

We also work with migrants.

We have a weekday mass in our chapel that is attached to our office building and we are active in assisting local parishes with their pastoral, liturgical and spiritual needs.

We seek to nurture the missionary spirit of the local church.

Fr Thomas Rouse SSC - Columban Leader
In 2016, Fr Thomas celebrated his 40th Anniversary of ordination to the Columban priesthood and 40 years of missionary service to the people of Fiji, New Zealand and Australia. He first went to Fiji in 1976 and continued to work there until 1991, when he was appointed to return to the Columban Region of Australia and New Zealand. In Sydney he worked in the Columban seminary formation programme and as Chaplain for the Fijian Catholic Community.

In 1997, Fr Thomas completed a Masters of Literature Thesis on the topic, 'Developing a Method of Reading the Bible in Present Contexts of Mission and Applying that Method to the Issue of Vanua (Land) in Fiji'.

In 2004, Fr Thomas returned to work in Fiji, first as Assistant Parish Priest in the parish at Ba, then for two three-year terms as Columban Regional Director for Fiji, firstly in 2007 and then in 2010. Upon completion of his second term as Regional Director for Fiji, Fr Thomas undertook a six month Sabbatical Programme at the Catholic Theological Union in Chicago, USA.

In 2014, he returned to work in New Zealand, becoming the Columban Mission Coordinator for New Zealand.

On November 23, 2019 he became the Columban Leader in New Zealand.